Final Fantasy 7’s movie sequel, focuses on some cosmic gathering called “Reunion.” That’s what I imagine people think about “Revival” when they aren’t fluent in Christianese. About four definitions down in the dictionary, we see the definition: “a reawakening of religious fervor, especially by means of a series of evangelistic meetings.” Wikipedia lists periods of historical revivals to give more concrete examples.

Los Angeles Coliseum Stadium (capacity of ~80,000) looked about 20-30% full for the day long Azusa Now event in 2016. “Tens of thousands of Christians filled the Memorial Coliseum in Los Angeles over the weekend to pray for a spiritual revival to sweep across the nation. Sponsored by The Call, the Azusa Now rally was strategically held on the 110th anniversary of the 1906 Azusa Street Revival, which broke out in Los Angeles and had a worldwide impact.”

Throughout the event I’d hear how this was the revival of revivals. Besides being interesting, exciting, and meaningful, I was still a bit underwhelmed. Weaving around the stadium, I realized that this may be the ultimate revival gathering for many, but what about for those who weren’t there?

Where were the engineers, inventors, and academics? The Lord put the idea of an intellectual faith movement on my heart years ago, and even today, the Church doesn’t move in the fullness of the passions and expertise that their congregations steward. This wasn’t my ultimate revival.

A few weeks later, I was announcing Passion Talks 2016 to my church. During announcements time, I asked my church back home, “how many people followed the Azusa Now revival in LA?” I began to explain that it may have been the ultimate revival for some, but that there was so much more to come. It’s great that people will travel the world to go to Bethel Church in Redding, California or IHOP in Kansas City, Missouri, but if we are faithful with what we steward, people from those places will come here for the outpouring of the anointing that we carry.

At Azusa Now, God emphasized to me that when revival hits the intellectuals and the inventors, all corners of the world will experience the liberation from bondage to decay that Romans 8 talks about. Whether we walk closely with Jesus or not, we all have a desire to see Heaven on Earth (as we are all made in the image of our creator).

In November 2018, I was speaking in Santa Maria at the Global Transformation Summit. I felt it was time to release a piece of what I saw as the blueprints for revival. In the next three to four years, I deeply believe that we will experience unity in ways beyond our imagination. However, as we go into 2019, we won’t be able to shortcut to unity without truly humble repentance, reconciliation, and restoration of relationships. In 2020, as we’ve been faithful in our stewardship, walking in authenticity and humility, is when we will have crystal clear vision. This is all going to happen very quickly, the seasons will come and go before we know it, and as we live worthy of our callings, we can begin to build and strengthen bridges that will overcome the darkest places of the world with love and light.

As we go into 2019, let us seek authenticity and humility, living worthy of our callings, and being faithful with the influence we’ve been given. May we continue to step out in faith to understand the complexity of creation in worship and tirelessly seek the blue prints, plans, and solutions for Heaven on Earth.

“Let us hold unswervingly to the hope we profess, for he who promised is faithful. And let us consider how we may spur one another on toward love and good deeds, not giving up meeting together, as some are in the habit of doing, but encouraging one another—and all the more as you see the Day approaching.”

“And this gospel of the kingdom will be proclaimed throughout the whole world as a testimony to all nations.”

“For the testimony of Jesus is the spirit of prophecy” 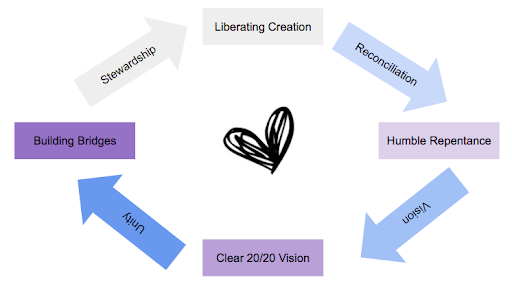