Wendy, the new IV Grad Staff worker at Stanford, says “we’re going to do the Christian TED talks.” It seemed so arbitrary, like deciding whether to get whipped cream with my latte. “Really, that’s all it takes?” The answer is a big resounding, “YES, it is that simple!”

This how it happened… (1) we used our Winter Retreat as the venue, (2) we publicized the opportunity to speak, (3) I made a Google form, (4) people signed up, (5) I formatted their abstracts/bios into a nice 2 page PDF.

Now, it wasn’t entirely effortless; however, once I made the PDF and start distributing the draft did it become real for most others, and a couple more people decided they didn’t want to miss the Passion Talk Bus. In the past, we’d been calling these “Reclaim Talks,” and then it became Christian TED-like talks, as it was more descriptive. I took my own liberty on this, and just branded the event “Passion Talks.” People drove into the Santa Cruz mountains, just for the Passion Talks portion of the weekend.

When time came around to begin the talk session, hardly anyone was around. I thought to myself, “can’t expect much for a first time thing.” Grad students, especially, are quite cynical when it comes to unfamiliar or new things. As you can see, I can be quite cynical about grad students (haha). Before I knew it, the room was nearly full.

The talks were about 10 minutes long, which I think are too short. I also believe we could have a better discussion arrangement. I, as a grad student, have been to many conferences and have seen many speaking/speaker situations. The speakers did a great job and the audience connected with a variety of topics and the various talks. After the event, I had a handful of people approach me about my work and passion for video games.

I remember at the beginning of the Winter Conference, I gave an impromptu announcement about the Passion Talks. I polled the audience of grad students asking, “who here has given a talk before?” Few people raised their hands. After the Passion Talks, a person commented that, of course they’d given a talk before, but outside of the familiar context, it didn’t seem like they ever had. We talk about our research when given permission, and wait for the invitation to speak about the passions in our lives.

That’s what Passion Talks is– the invitation to explain to others why we live. Towards the people who spoke, it was remarked, that they never knew that the speakers were capable of giving such talks. Some of the speakers often kept their passions to themselves, I suppose.

I sat with Brad during dinner, and I believe, he and Marquise were going to try to do a local version of this at Berkeley. Kassa and I started to discuss what an actual Passion Talks conference would look like. We picked the last weekend of July and Stanford as our venue. The response was overwhelmingly positive. It’s funny to think of how little traction I’ve had in the last three years for this vision. It seemed like each year, we’d barely inch forward.

If you go to the main page of the site, you will find the Call For Participation for the Passion Talks event at Stanford in July. To me, it seems like an obvious thing to do, but we can never fully predict how it all comes together.

As far as other similar events, check out:

Shortly after the conference, I got this message from Wendy:

I just wanted to let you know – I’m on an IFES list serve with campus workers all over the world, and we’re all sharing ways of engaging the university.  I told them about the passion talks and they just went wild!

They were so excited and some of the groups have already resolved to share the idea with their students to try them!

So what you’ve started here is going international 🙂

They’re a fabulous idea and I’m excited to see if you and Kassa can get a conference going in the Summer!

Let me know when you guys want to start working on it.

See you all in July!

Here’s the general announcement that went out: Winter Conf 2013 Slide

Here’s the program of talks: passiontalks2013 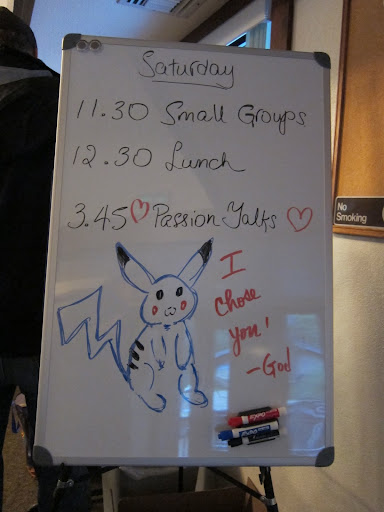